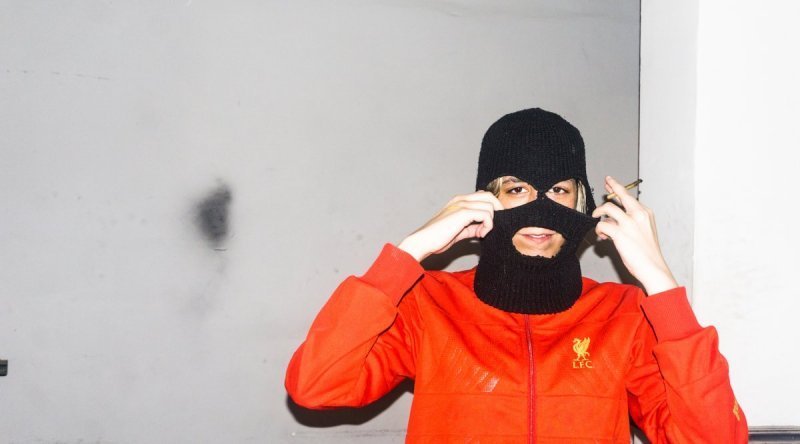 Glitchgirl is a Spanish producer and music artist that combines rave and punk aesthetics. She played a killer set at Fluff in 2019 and we have invited her this year to curate a Friday night afterparty. She is also excited to share with you her tips from this year's line-up. Here they are:

LIST OF BANDS THAT I CAN NOT MISS IN THE FLUFF FEST, by GLITCHGIRL:

AUTOR: After my set in fluff fest 2019 I threw myself backstage and fell asleep on the floor or some shit. Then I was woken up by dominik n some guys n was fuckin boss. Then I learned about pitva n then I got obsessed wit it. Then I was listenin some fluff bands in my house and was vibing a lot with the postpunk vibes of autor and suddenly re-remembered that dominik is in this band and loads of ppl more from other cool bands. So. Go to that

CHRIS CUNDY: better than fish n chips . I am a clarinet player so I listened to this and was in awe of the talent of this mf. If he plays at the same time of my show I will go to his show and not play my show

DIRTY FENCES: yeah I vibe with this kinda music . used to listen to this 10 years ago. Aaaa being young and healthy. Good energy and probably assholes cant wait to meet them and see that theyre actually really nice people and hit myself in the head for having thought that (maybe we end up having a PHYSICAL FIGHT or maybe we can end up making holes in beer cans and drinking from them, WHO KNOWS)

DAWN RAY'D: I LOVE THE ANTIFASCIST THING THEY HAVE GOIN ON BECAUSE IN DARK RAW AND FAST MUSIC THERES A LOT OF FUCKIN FASCISTS HIDING IN THE SHADOWS.. LOVE THE VALUES OF THIS BAND N LOVE HOW THEY EXPRESS IT IN THEIR MUSIC N VIDEOS WELL DONE BLOW ME ED OFF BRRRAAPPPPPPPP

DIVO INSTITUTE: Real music authentic as fuck literally they do what they want go to see them

EXORBITANT PRICES MUST DIMINISH: hardest shit we will see in the fluff fest literally. Old school sound the singer is amazing they all fuckin shred oh my fuCKIN G FUCK GREAT STRUCTURES N MELODIES FUUKC OFF!

FAMILY VACATION: ok I said the last band would be the hardest but this one is the DEEPEST GOD FUCK I CANT IMAGINE WHAT SOMEBODY ON KETAMINE WOULD FEEL WHEN THIS SHIT IS BREAKING DOWN

COLD BRATS: My bros from the land of Romania, played with them in their first shows and they played with me in my first shows in Romania….. I fuckin love them and im not being biased anyway because they are the freshest fucking punk thing that ive heard. Its punk its hardcore its phychedelia and its just absolute chaos. In one of the shows I think they were throwin bananas . I love u cold brats sons of bitches shoutout to volo my literal brother from bacau (na were not brothers)

Lobbyboy&saab900turbo YOOOO I LOVE THIS SHIT LIKE. We need more 2 or 3 pieced- rap trap local urban music bands. Only way to transmit ideas to younger people and fuckin change a generation. Well done am sure u have good fun in ur shows and I like ur shit.

SHOEBILL: Absolute madness fast mashup core dancecore music that will make you have 5 panic attacks in 1 second. Its good its fast it hits and also my flatmate so I listened enough of their shit to know its good. bRING IT

MANDIDEXTROUS: Well I curated mandi for the fest so its pretty obvious I wanna see what she has prepared for this set. Her speedbasssssss and jungletek are going hard in the uk, its time to export. Also she makes some hard electronic queer parties happen in the UK that are bangin. Check er out-NOW. I warned u

GROVE: Yes yes more PoC queer representation round ere, n overall AMAzIN STUFF. Grove is a vocalist producer and dj from Bristol n raveeeeeeee oriented and experimental like if death grips was made of fruit smoothie. I CANT FUCKIN WAIT TO SEE THEM AND BOTHER THEM ABOUT ME WANTING TO MAKE A BEAT FOR THEM. YES.

KILLDREN: First people from UK that saw my music in fluff 2019 and invited me to tour wit them that November. ABSOLUTE. BOSS. SHIT. BEST.PEOPLE: and bangin political punk music wit some drum and bass and all that shit that uk people like. They also have another project called CHWALAW that is about welsh traditional music mixed wit their own thing and Efa has Efa Supertramp acoustic music project (SO GOOD) n also Nick has OBESE and Nick Ronin and another new one but I am an asshole without a working memory

PORTRAYAL OF GUILT: Well I have a vinyl from them and I never expected that id play with them so am just like straight up going to that show even if it means that they have to cut my arms and legs

QLOWSKI: YOOOO THIS PEOPLE IS VERY FUCKIN NICE AND MAKE SOME COOL NICE MUSIC THAT ALSO IS HARD AND ALSO IS NICE OH MY FUCKING GOD I LOVE QLOWSKI I MET THEM IN LIKE PRAGUE AND I WAS LIKE HAVING A PANIC ATTACK I LOVE THEM

STORM{O}: Italian Screamo Band I fuckin love them and I never saw them live and now I am going to literally play with them in the same festival AND I LOVE THEM I LOVE THEM

DECULTIVATE: The POHRDAT EP IS THE CHAOS I NEEDED IN MY LIFE AND I WONT REST UNTIL I GET THIS RELEASE IN PHYSICAL . THE BREAKDOWNS: THE HARMONIES. THE

YC-CY: Every time I listen to them I want to die but in the good way, its like a hole full of electricity in ruins

V0NT: This is perfect I have nothing else to say

JADRAN: WILL MAKE U CRAZY WITH HIS TECHNO SHOW THIS THURSDAY!!!!! GO TO SEE IT ITS GONNA EXPLODE YOUR MIND!